I've been part of countless musical projects over the years - listed here are some of the latest and greatest!

Youkali is a dynamic ensemble that plays with infectious enthusiasm and feeling in an array of styles. At the core of the trio are accordion, fiddle, and bass. With each member a multi-instrumentalist, expect an eruption of tone colors. Songs and tunes are chosen from a diverse repertoire and blended into a sophisticated mix of international folk, classical, swing, tango, blues, pop music, and jazz, dubbed " post-eclectic " ... (see more)

Listen on bandcamp or learn more on the facebook page!

Roxanne Oliva plays on over 30 albums and film soundtracks, notably with Rock and Roll Hall Of Fame inductee, Tom Waits. She is an accordion virtuoso, sings, and is skilled on a delicious variety of stringed, wind and percussion instruments. Her CD, Box Candy, is a triumph, pure and simple. Roxanne was featured in the 2012 Accordion Babes Calendar. Look out!

Daniel Kahane is a performing artist with an uncanny ability to enchant audiences with his warmth and vitality. He majors in fiddle, and also sings and gets around on guitar, mandolin, banjo, spoons, and viola. DK is also the front man for the venerable L.A. cult band, Hot Lips and Fingertips; they have delighted standing room only audiences, appeared on national and international television, and regularly played live at NBC studios in Burbank.

Josh Fossgreen. Some folks are just born with it . . . young master Fossgreen plays his instrument with astonishing and tasteful virtuosity, a brilliant selection of aural colors and a unique flavor that will have you questioning how the sounds you are hearing are come out of a single electric bass guitar. Josh is proficient in a rainbow of styles from Samba to Ska, traditional Folk to Jazz, Baroque to Rhythm and Blues, and beyond. He appreciates performing in small-group situations where each instrument has room to breathe, speak, and interact. Josh is musically wise beyond his years.

Hot Lips and Fingertips is a musical phenomenon that evolves as its six members continue to follow their individual creative paths. The depth and diversity of their personal pursuits and skills shape their collective performances as a multi-faceted dynamic ensemble. Individually, they are associated with dozens of TV shows and movie sound tracks as well as historic pop, rock and country artists, over a hundred albums (including some that are iconic platinum and gold records) and several Grammy winners... (see more)

Check out HLFT on facebook or watch some videos! 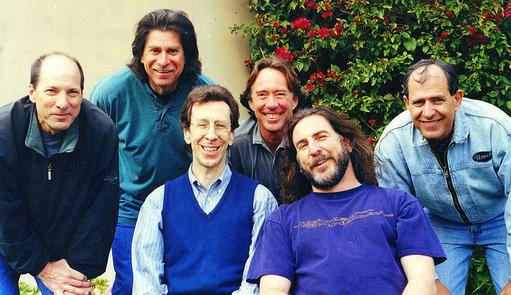 HLFT’s collective services have been sought by Jackson Browne, Bonnie Raitt, Garth Brooks, Jerry Garcia, Wynona Judd, Eddie Money, Maria Muldaur, John Lee Hooker and dozens more artists just as recognizable. Perform a quick Google search on band members Ed Berghoff, Jim Garafalo, Mark Indictor, Daniel Kahane, Joel Tepp, and Larry Zack; you will find much more than can be listed here. Hot Lips and Fingertips Play together as a band for the sheer joy of the music and the satisfaction of sharing it with their friends and fans, both old and new. As always you will hear their eclectic mix of Irish, Scottish and American fiddle tunes, Country, Swing, Blues, Cajun, Baroque, Rock and Roll and more all woven into a single evening’s performance.


The Durant Family Band are 5 accomplished musicians who sing and play a dazzling array of instruments and styles. They came together to record this one-of-a-kind album as a special project.... (see more) 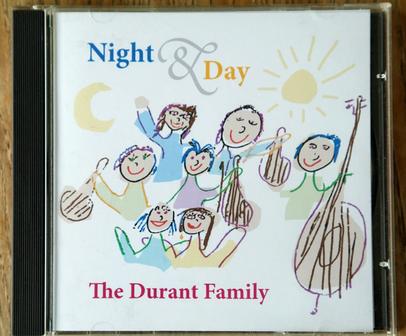 Night and Day is a collection of traditional American folk music. Originally released as a two sided cassette with children in mind, the 'Day' side has bright uptempo tunes, and the 'Night' side has mellower softer songs and lullabies. Digitally remastered, each CD is custom made, burned one at a time, and the jewel box art printed and assembled to order. The original cover was drawn by one of the musicians' 6-year-old daughter. This is real hand-made music.

These are not specifically "children's songs", rather tunes chosen from the folk repertoire that children and adults appreciate and enjoy together. Makes a wonderful gift for a baby shower or new parents.

The liner notes give a taste of what the music is all about, you can see exactly what songs are included, and who plays what on each tune.

This CD is not available in any store nor on any online service. If you like authentic folk music with fresh original arrangements, three-part harmony, guitars, banjo, fiddle, bass, mandolin, dulcimer, ukulele, and Irish penny whistle, you will love this unique record.